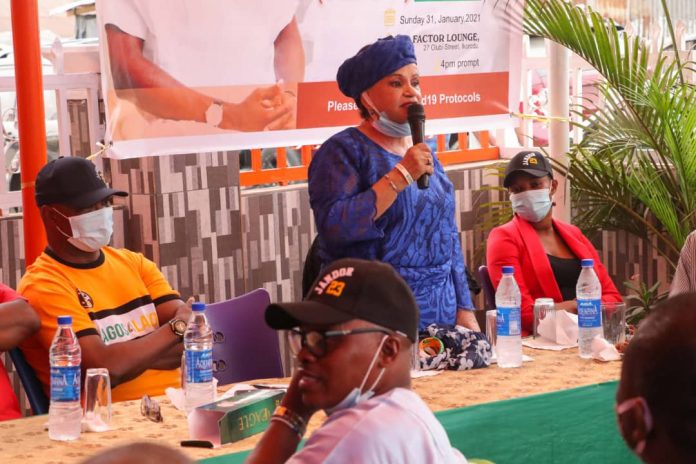 ** calls on Lagosians to support the Lagos4Lagos project

A former Secretary to the State Government of Lagos, Princess Adenrele Adeniran-Ogunsanya, has canvassed support for the initiator of the Lagos4Lagos movement, Mr. Abdul-Azeez Olajide Adediran, towards accomplishing the dream of a Lagos that works for all.

Speaking at an interactive evening with Jandor in Ikorodu, Princess Adeniran-Ogunsanya saluted the courage of Mr. Adediran for taking the lead to deliver Lagos back to the people of the state. The former Lagos SSG while addressing the youth, she said “Jandor didn’t hide under the table, the young man as he is been referred to, is a son to me, if he can come out boldly, the rest of the work is left for you, and that is your future”.

Jandor, as he is fondly called, had during the interactive session reel out the plans to ensure that everyone is part of the drive to make Lagos work for Lagos. The initiator of the Lagos4Lagos movement tasked the youth to work towards taking significant roles in the build-up process and even beyond. While taking ownership of the Lagos4Lagos project, the people of the Ikorodu division, however, resolved to come out enmasse to participate in the All Progressives Congress’s registration/revalidation exercise.

The meeting which hosted top politicians in the Ikorodu division also had in attendance the youth and women representatives across the Local Governments and Local Council Development Areas of the division.

Due diligence responsible for delay in contractors’ payment – FHA