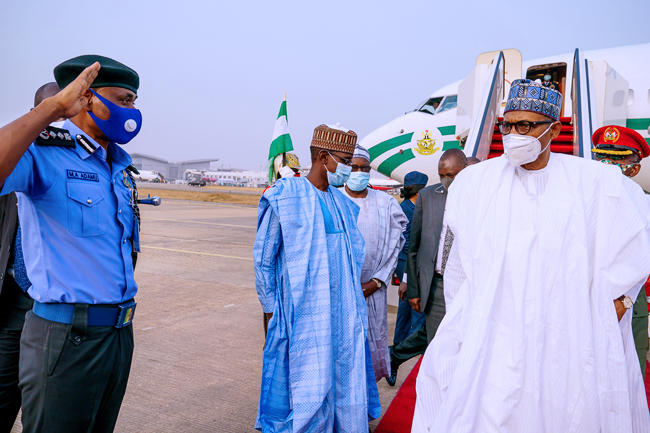 President Muhammadu Buhari has arrived in Abuja after his four-day trip to his hometown, Daura in Katsina State. He was received at about 6:00 pm on Tuesday at the Nnamdi Azikiwe International Airport by government officials including the Inspector General of Police, Mohammed Adamu and the Minister of the Federal Capital Territory, Mohammed Bello.

The President was in Daura for the registration and revalidation exercise of the All Progressives Congress. After the exercise, the president called on Nigerians to support the development of the country and believes all hands must be on deck in the quest for nation-building.

The 78-year-old also assured Nigerians that his administration will be transparent and open with the implementation of the 2021 budget. He noted that the budget aptly captured some of the visions of the administration, and all efforts will be poured in to ensure effective implementation.

“We have directed all the Ministries, Departments and Agencies to follow what is in the budget so that we can get the National Assembly to easily support the next budget,” the President said, as quoted in a statement by spokesman Garba Shehu.