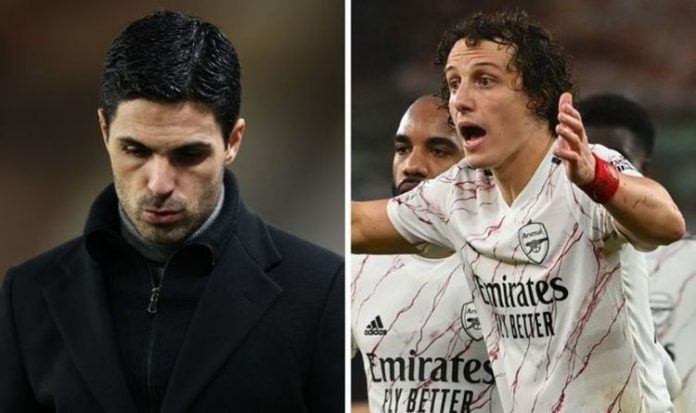 Arsenal manager Mikel Arteta criticised the referee’s decision to send David Luiz off in the loss to Wolves and said the Gunners may appeal the ban. The Gunners were 1-0 ahead when Luiz was judged to have fouled Willian Jose and, because there was no attempt to play the ball, Luiz, 33, was dismissed.

Ruben Neves scored the resulting penalty and Wolves won the game 2-1. “I’ve seen it 10 times in different angles and I cannot tell you where the contact is,” said Arteta. However, Wolves boss Nuno Espirito Santo had a different view and said: “I think the referee doesn’t have any other option in both situations.”

Arsenal led 1-0 thanks to a goal from £72m club record signing Nicolas Pepe, before the Luiz incident in first-half injury time. Daniel Podence played a through ball and Jose, on his home debut since joining Wolves on loan from Real Sociedad, got in front of Luiz, with the forward then going to ground. Referee Craig Pawson gave the penalty and sent off Luiz – his third red card for Arsenal – and following a video assistant referee check, the decision remained, although Pawson was not asked to review the incident on the pitchside monitor.

Luiz is set to miss Arsenal’s Premier League game at Aston Villa on Saturday, but asked if he would appeal the red card Arteta said:  I would say yes, let’s go straight away, but we have to speak and make the decision [about] what’s the best thing to do. “If they have another 50 different angles to watch it, maybe I will be surprised. I looked at seven different angles and I cannot see any contact there.

“To play with 10 men for 45 minutes in the Premier League without your centre-back, against this opposition, of course it changes the game. “It was a big decision, if they got it right and can justify they got it right I put my hand up and apologise. The way we lost the game is where it really hurts, it’s painful.”