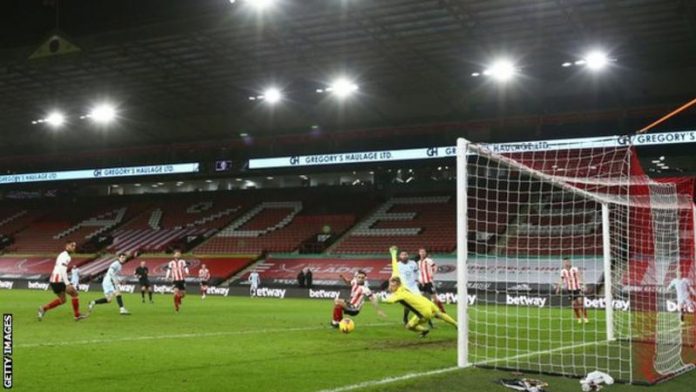 Chelsea recovered from Antonio Rudiger’s own goal to move up to fifth in the Premier League, as Thomas Tuchel’s unbeaten start as manager continued with victory at Sheffield United. The German, who took over from Frank Lampard last month, watched as his side struggled in the opening half hour on a freezing night as Oliver Burke fired wide in the opening minute.

But the visitors went ahead before the break when Mason Mount found the bottom corner following Timo Werner’s cross from the left. Chelsea then conceded the first goal of Tuchel’s four-game reign in calamitous circumstances when Rudiger poked past Edouard Mendy into his own net. The winner arrived in bizarre circumstances. Werner was brought down by goalkeeper Aaron Ramsdale for what looked like a clear penalty, but referee Kevin Friend ignored Chelsea’s appeals and waved play on.

The action continued for more than a minute before the video assistant referee intervened, but despite the delay, Jorginho kept his cool from the spot for his sixth goal of the season. Coming after Liverpool’s 4-1 defeat by leaders Manchester City, the win put Chelsea’s Champions League ambitions back on track after they had slipped to ninth under former boss Lampard.

Sheffield United, who had won three of their previous five games, pressed for a late equaliser but found Rudiger in the way and missed out on the chance to move above second-bottom West Brom.