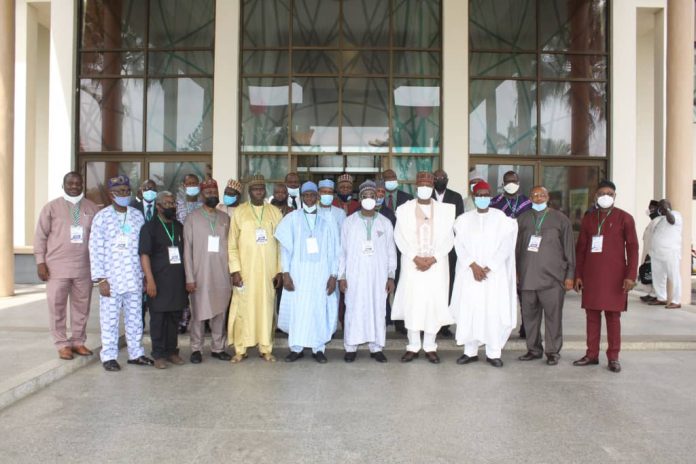 Minister of aviation Senator Hadi Sirika has urged aviation stakeholders to tighten their belts and device means by which the sector will adapt and operate efficiently with COVID 19 pandemic, inferring that COVID 19 might linger for a while. He said this has become necessary as the sector cannot afford to take back seat nor derail from the implementation of the roadmap being pursued by the Ministry.

The Minister stated this at the opening of a 4-day capacity building retreat for senior management staff of the Ministry and its Parastatals holding at the Ibom Hotel and Golf Resorts in Uyo, Akwa Ibom state. According to Sirika, “The aviation sector in 2020 was the worst affected by the pandemic. This happened at a time when the sector become, in 2019, the fastest-growing sector of the Nigerian economy, signifying that our modest effort and Roadmap is not only on the right direction but yielding the right results.” he stated.

The minister implored the participants to come up with a framework for improving the relationship between Ministry and its agencies to the level that will not only achieve a very high level of implementation of the Roadmap, but will also smoothen the inter-Agency relationship. The Chairman, Savannah Centre for Development and Training, facilitators of the retreat, Malam Abidu Yazid observed that whatever was being done in the aviation industry, there was a need for partnership and acquisition of knowledge for the industry to succeed.

He said synergy was key to the realisation of objectives where more than one player is involved in driving policies and used the aviation sector as an example of an industry where symbiosis cannot dispensed with. He commended the Minister of Aviation Senator Hadi Sirika for leading the sector from the front by not shying away from taking responsibilities and embarking on projects and programmes for the ultimate benefit of the nation’s Aviation industry. Earlier in his welcome remark, the Permanent Secretary of theMinistry, Engr. Hassan Musa said aviation was a very peculiar sector which is subjected to international regulation and audit, which means that all activities are measured by international standards.

According to the Permanent Secretary, the retreat was organised in order to forge the synergy that would facilitate the realisation of the objectives of the aviation Roadmap, which, on its own, is geared towards the overall development of the sector. The theme of the retreat was “The Ministry of Aviation and its Parastatals: A symbiotic relationship for National Development, Growth and Progress”

Nigeria’s prosperity concentrated in the hands of few people – Buhari