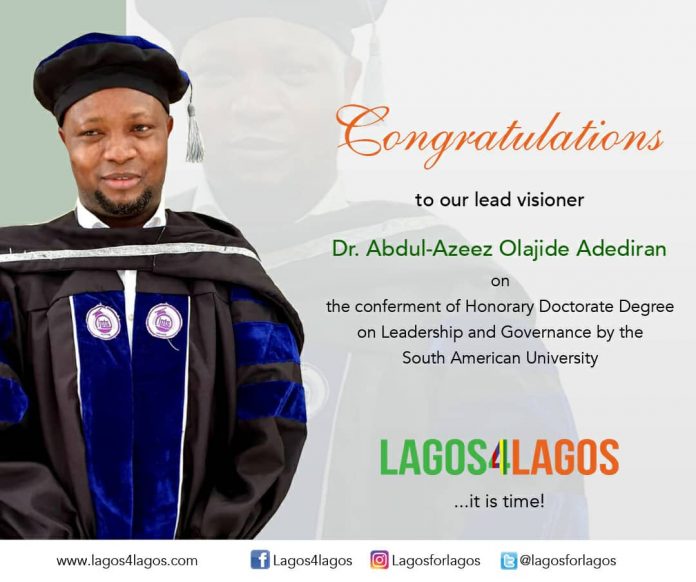 The Lagos4Lagos movement has congratulated its Lead Visioner, Dr. Abdul-Azeez Olajide Adediran, as a recipient of the honorary doctorate degree in Leadership and Governance by the South American University.

In a congratulatory letter signed by the Principal Coordinator of the Lagos4Lagos movement, Hon. Bode Makinde, he described the conferment as testimony of ‘the sound and healthy leadership skills of Dr. Adediran in both the media industry and politics’. While extolling Jandor’s impactful leadership prowess, Hon. Makinde said “the Lagos4Lagos movement remain confident that the Lead Visioner is more than prepared to positively transform Lagos and make it favorably comparable to the best developed cities anywhere in the world”.

According to a statement signed by the American varsity, Jandor, as he is fondly called, was conferred with the honorary doctorate degree as part of the activities lined up to celebrate and further encourage leaders across the world. “On behalf of our members across the 20 Local Governments and 37 Local council development areas of Lagos, including those in diasporas, we celebrate and wish you greater accomplishments,” Hon. Makinde added.