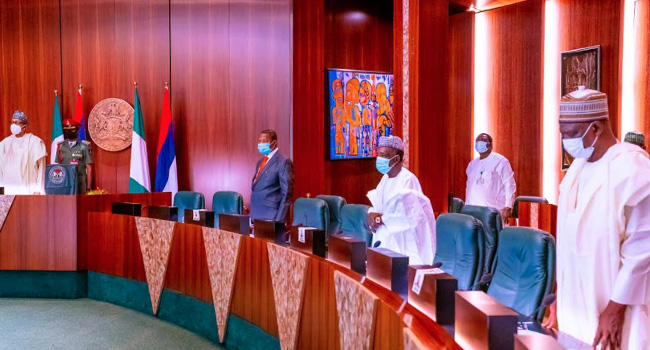 The Late Brigadier General Abdallah served in the Federal Executive Council during the military regime when President Buhari was the Head of State, as Minister of Communications and later Minister of Social Development, Youth and Sports. He later became the Military Administrator of Kwara State from 1987-1988. The minute silence was observed shortly before the commencement of the weekly meeting holding at the Council Chambers of the Presidential Villa, Abuja.

The meeting which is being presided over by President Muhammadu Buhari has in attendance physically Vice President, Yemi Osinbajo; Secretary to the Government of the Federation, Boss Mustapha and the Chief of Staff to the President, Ibrahim Gambari. Ten Ministers are equally physically attending the meeting. They are those of Information and Culture- Lai Mohammed, Finance- Zainab Ahmed, Justice- Abubakar Malami, Agriculture- Sabo Nanono and the Minister of Education- Adamu Adamu.

Others are the Ministers of Health, Dr. Osagie Ehanire; Federal Capital Territory, Mohammed Bello; Humanitarian Affairs, Sadiya Umar; Trade, Industry and Investment, Niyi Adebayo and labour and Employment, Dr Chris Ngige. The Head of Service of the Federation, Dr. Folasade Yemi-Esan, and other Ministers are participating in the weekly cabinet meeting from their various offices in Abuja.