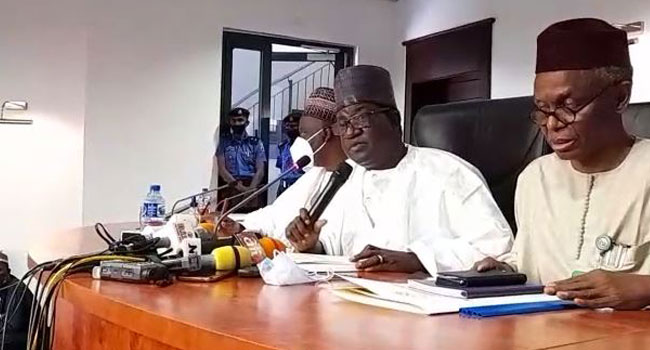 Governors of the nineteen Northern States, Traditional Rulers, and Security Chiefs are meeting in Kaduna today to discuss the alarming rise in security threats and other socioeconomic problems in the region. The meeting which is taking place at the Kaduna state government house comes barely two weeks after governors of the Northwest zone held a similar meeting with the service Chiefs and the National Security Adviser to discuss ways to address the issue of banditry and kidnapping bedeviling the zone.

Among the governors attending today’s meeting are those of Kebbi, Jigawa, Sokoto, Kaduna, Nasarawa, Kano, Katsina, Plateau, as well as the deputy Governors of Bauchi, Kogi, Zamfara, Benue, and Niger states. Also in attendance is the Chief of Staff to the president, Professor Ibrahim Gambari, the Deputy Speaker House of Representatives, the Inspector General of Police, the Minister of Information and Culture, and the Director-General State Security Services. Others are traditional Rulers led by the sultan of Sokoto and representatives of the Northern Elders Forum.

In their opening remarks, the host Governor, Nasir El-Rufai, and the Chairman of the forum, Simon Lalong said the meeting is long overdue and crucial for the progress of the north and the country in general. While El-Rufai urges his colleagues to adopt strategies to forestall all forms of security challenges in the north, Governor Lalong regrets the attacks and killings menacing the region, noting that it is the responsibility of governors and other leaders to find lasting solutions to the problem.