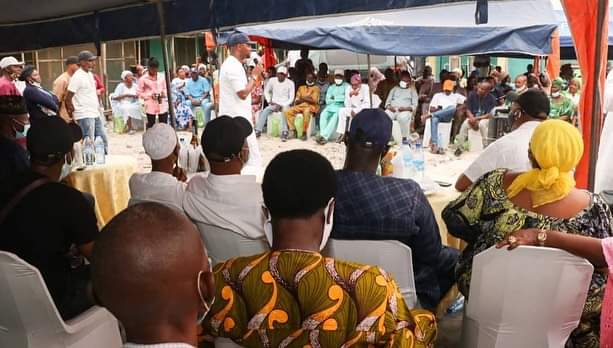 Top politicians in the Mushin Local Government Area of Lagos state over the week jettisoned their political affiliations to welcome home their own, the Lead Visioner of the Lagos4Lagos movement, Dr. Abdul-Azeez Olajide Adediran, who was in Mushin for the annual Maolud Nabiyy hosted by the Allah-Mujeed Muslim Community.

Mushin, a popular suburb of Lagos state is home to Jandor as it serves as his second address having spent an integral part of his growing up years in the area. Amazed by the massive reception, Dr. Adediran said “It was a home coming of sort when I visited my hood in Ward H1, Mushin Local Govt”.

He further acknowledged that the “Political Leaders across party lines alongside spiritual Leaders of both the Christian and Muslim faith were on ground to receive their own”. The meeting which was held at the home of a foremost leader in the ward, Hon. Oladele Dasaolu, gave an opportunity for refocus and realignments towards ensuring that the objectives of the Lagos4Lagos movement are achieved.

While addressing the gathering, Jandor appreciated the people of Mushin for standing by their own to return political power back to local government which had once fed the best Governor in the history of Lagos state, Alhaji Lateef Jakande. The Lagos4lagos movement is enjoying steady growth and fast becoming a household name in Nigeria’s most populous city of Lagos.

US celebrate groundbreaking of $537m consulate building in Eko Atlantic