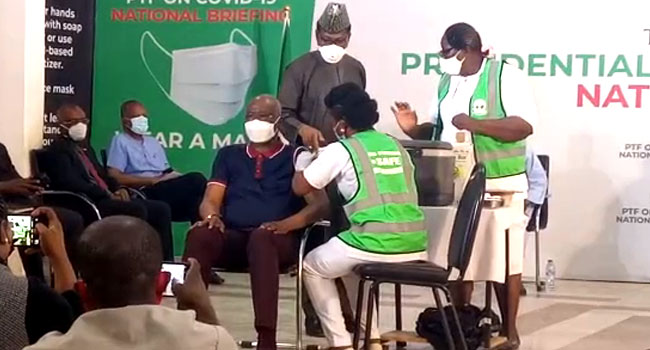 The Chairman of the Presidential Task Force on COVID-19, Mr Boss Mustapha, and other members of the PTF have received the AstraZeneca vaccines. They took the first jabs of the vaccine on Monday at the briefing of the task force held in Abuja, the Federal Capital Territory (FCT).

Mustapha, who is also the Secretary to the Government of the Federation (SGF), was the first to take the vaccine. Thereafter, the Minister of Health, Dr Osagie Ehanire, also took his first jab of the vaccine and was followed by other members of the task force. They include the Minister of Information and Culture, Mr Lai Mohammed; Minister of Foreign Affairs, Mr Geoffrey Onyeama; and the Director-General of the Nigeria Centre for Disease Control (NCDC), Dr Chikwe Ihekweazu.

The Executive Director of the National Primary Health Care Development Agency (NPHCDA), Dr Faisal Shuaib, as well as the Country Representative of the World Health Organisation (WHO), Walter Mulombo, were also among those who received the vaccine. Before the officials took turns to receive the vaccine, the PTF chairman briefed reporters on the latest development since the commencement of the vaccination exercise.

According to him, the government has been engaging with the authorities of KLM and the Emirates airlines over pre-departure testing requirements that passengers must meet before travelling from Nigeria.