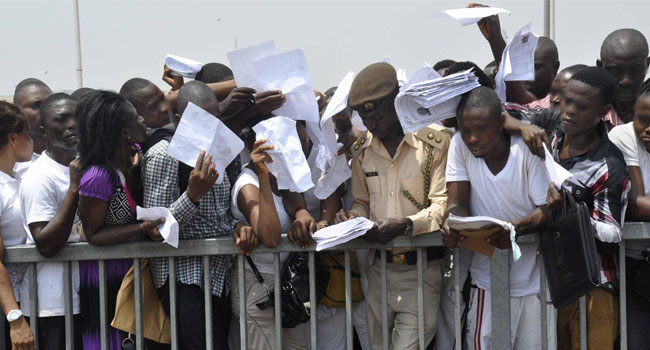 Nigeria’s unemployment rate has increased from 27.1% to 33.3% in the fourth quarter of 2020. According to the Labour Statistic Report released by the National Bureau of Statistics (NBS) on Monday, the figure is 6.1% higher when compared to the 27.1% recorded in the second quarter last year.

A breakdown of the report shows that the total number of people with employment stood at 46.48 million while the underemployment rate was down by 20.6 percent at 15.91 million. NBS added that in the case of unemployment by state, Imo State reported the highest rate of unemployment with 56.64%, followed by Adamawa and Cross River States with 54.89% and 53.65% respectively.

Benue recorded the highest number of underemployment at 43.52%, while Lagos State recorded the lowest underemployment rate, at 4.5% in the fourth quarter of 2020, the report said. The States with the lowest rates were Osun, Benue and Zamfara States with 11.65%, 11.98% and 12.99% respectively. Unlike in the economically active population, the age group that accounts for the highest number under the labour force is the 25-34 age group.

This according to the report is expected as most persons within the age group of 15-24 are involved in one form of schooling or the other, hence are not willing and/or available for work.

FA Cup: All first-round ties including non-elite teams to go ahead...