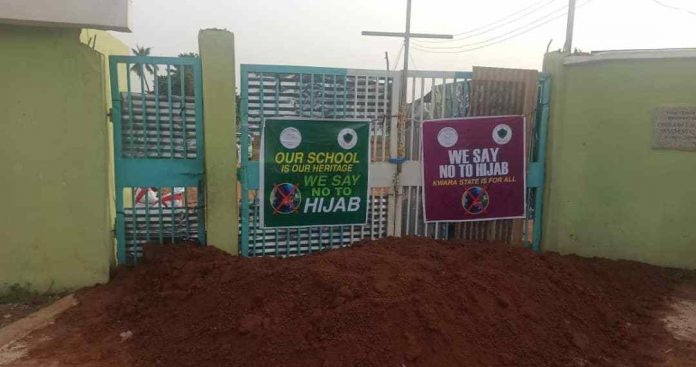 Following the directive of the Kwara State Government to the 10 schools at the centre of the controversy over the use of the hijab, some churches have refused to reopen the schools. On Friday morning, Christian faithful were seen gathered in front of Cherubim and Seraphim school, singing and dancing.

A load of sand is also seen in front of the gate to prevent both teachers and pupils from gaining entrance. Although the teachers turned up at Saint Anthony School, as directed by the government, they were seen gathered in groups discussing the situation. Security operatives later intervened and forced opened gates of both schools. The situation at Baptist School, Surulere, where crisis broke out two days ago was however peaceful as teachers gathered in groups inside the school.

The State Government had earlier on Thursday directed principals, teachers, and staff of the schools to reopen. The government explained that the resumption became necessary in order to prepare the final year students for their external examinations. The government warned that any staff that fails to report to duty will face the full wrath of the law as it will not condone any act of insubordination.