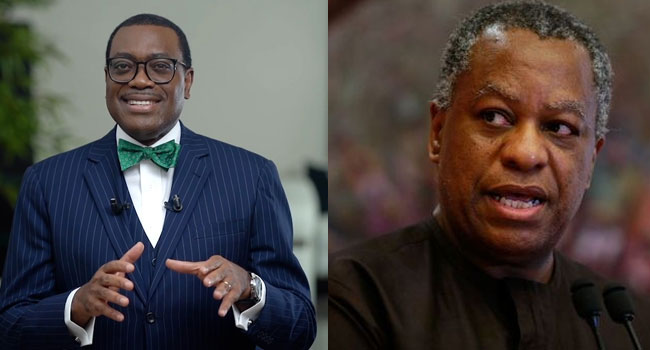 The President of the African Development Bank (AfDB), Akinwumi Adesina, has hailed Nigeria’s Minister of Foreign Affairs, Geoffrey Onyeama for what he described as “his remarkable service and leadership.” Adesina in a post on his official Twitter handle commended the Minister for his outstanding diplomatic relations with other countries.

He lauded the role he played to ensure Nigerians got elected into global positions “I am so proud of Nigeria’s Foreign Affairs Minister @GeoffreyOnyeama for his remarkable service & leadership. This meek, gentle & humble diplomat is outstanding. Under his watch with the strong support of President @MBuhari, Nigerians got elected into global positions,” the AfDB boss said. It will be recalled that Director-General of the World Trade Organisation (WTO), Dr Ngozi Okonjo-Iweala during her visit to the Ministry of Foreign Affairs appreciated the ministry for their support in ensuring she won the race for WTO DG.

Okonjo-Iweala appreciated Onyeama for his personal efforts saying he was absolutely amazing. “You worked night and day along with the Ministry of Trade and Investment and Minister of State for Foreign Affairs. You worked personally to make sure that this happens. I remember calling you so many nights with one complaint or the other or one demand or the other and you kept your cool and were always trying to sort it all out. “In short, you were absolutely amazing and I want to thank you for your personal attention to this,” the WTO DG told Onyeama.

A list of Nigerian professionals recently got appointments into top government positions in global organisations, as well as the United States and United Kingdom (UK). This includes the appointment of Ngozi Okonjo-Iweala as the first female and first African director-general of the World Trade Organisation (WTO). The re-election of Adesina in 2020 as AfDB president. In 2019, Boris Johnson, British prime minister, named Kemi Badenoch a minister in his cabinet. In November 2020, United States President Joe Biden appointed Adewale Adeyemo as deputy secretary of the treasury department.

Nigerian Army will be ruthless with bandits, cattle rustlers, others –...