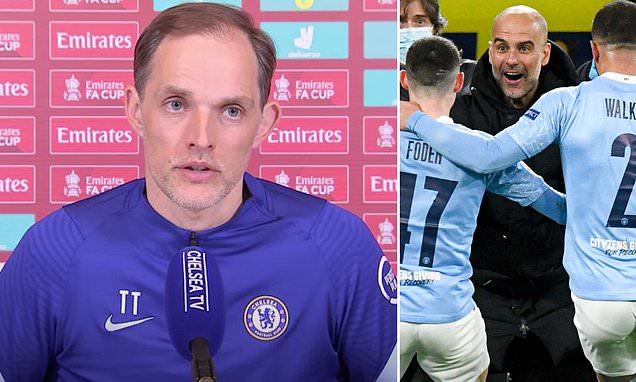 Manchester City are the “benchmark” across Europe but Chelsea “will hunt them” next season, says the London club’s manager Thomas Tuchel. The teams meet in the FA Cup semi-final on Saturday with Tuchel searching for a first win over a Pep Guardiola side.

City are 20 points clear of fifth-placed Chelsea in the league and look set to win a third title in four years. “We have to accept there is a gap between us and Manchester City,” said Tuchel, who took over in January. “If you look at the fixture in the Premier League and the fixtures in the last years we have to accept this. “And it’s important that we accept this without making ourselves too small. From day one of next season we we will hunt them. We will try to close the gap between us.”

German Tuchel said City and German champions Bayern Munich were the “benchmark” in European football. Guardiola’s side have won seven of their past nine games against Chelsea, including 3-1 at Stamford Bridge in January when Frank Lampard was still in charge.

“We have to admit there is a gap but for 90 minutes we are very self-aware and very self-confident that we believe we can close the gap tomorrow for one game,” Tuchel said.