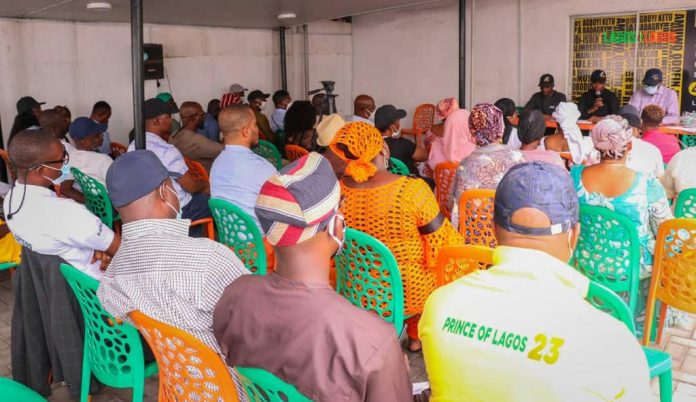 The continuous forward surge of the Lagos4Lagos movement got further boost yesterday as its 51-member state executive got formally inaugurated at the historic swearing-in ceremony, held at its Headquarters and State Secretariat in Lagos. In attendance at the landmark event was the Lead Visioner of the movement, Dr. Abdul-Azeez Olajide Adediran (Jandor) who presided over the ceremony amidst excitement amongst all members of the movement’s leadership team across the state structure who were also present.

Speaking to the newly inaugurated members, Jandor enjoined them to take their roles with utmost sense of responsibility and dedication. He stated that nothing short of focus and stubborn commitment towards the movement’s collective goal will be required of them as essential ingredients that will help make the goals manifest. Jandor also challenged the newly inaugurated executives to eschew and expose acts that are inimical to the interest of the movement. He charged them to be grounded in the Marxist Critical Theory that focuses on unmasking and ending all justifications of social and economic oppression.

On his part, the Principal Coordinator of the movement, Mr. Benson Olabode Makinde, while giving his acceptance speech on behalf of other state executives, charged the team to put up top level performance on their mandates at all times as it shall serve as a benchmark for evaluation after stated probation period. The newly inaugurated State Exco members include Hon. Bode Makinde, Principal Coordinator; Funke Ijayekunle, Central Coordinator; Olajumoke Fakoya, State Woman Leader amongst others.