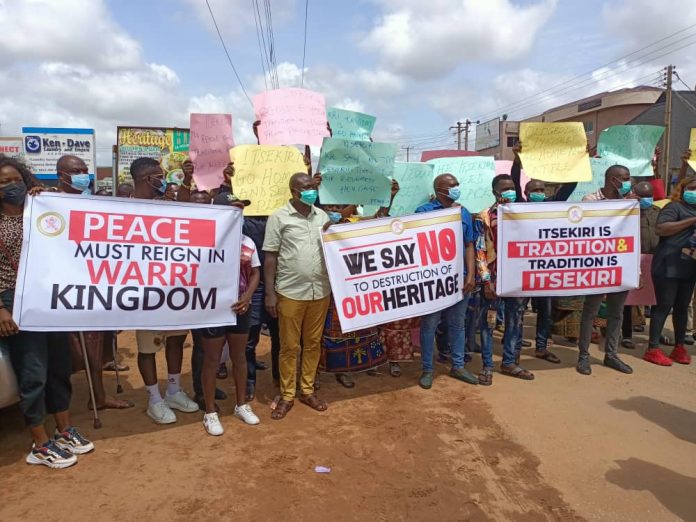 Following the controversy that have continue to trail the emergence of the Olu of Warri designate. Youths from Itesekiri kingdom in Warri South local government area of Delta state, have storm zone 5 headquarters of the Nigerian Police force in Benin the State Capital demanding for a peaceful withdrawal of the case from the police so they can settle their dispute according.

Youths in their numbers, with placards of different inscription were at the office of the Assistant Inspector General of Police Zone 5 in Benin City, to register their displeasure over the turn of events since the passage of the last Olu of Warri.

Describing the situation as uncalled for, they are concern why matter  that have always been resolved peacefully according to traditions back dated to 400 hundred Years have been allowed to degenerate to the level where custodians of their law are now frequently call in by men of the police force for questioning.

Addressing the protesting Youths, the Zonal Public Relation Officer DSP Tijani Momoh, assure them of the police cooperation in Settling whatever issues that have led to the disputes between the warring factions. With negotiations as the tools for a peaceful resolution expectations are high as the protesting Youths have decided to take that bull by his horn.

Presidency 2023: Jonathan, other chieftains free to vie for PDP ticket...