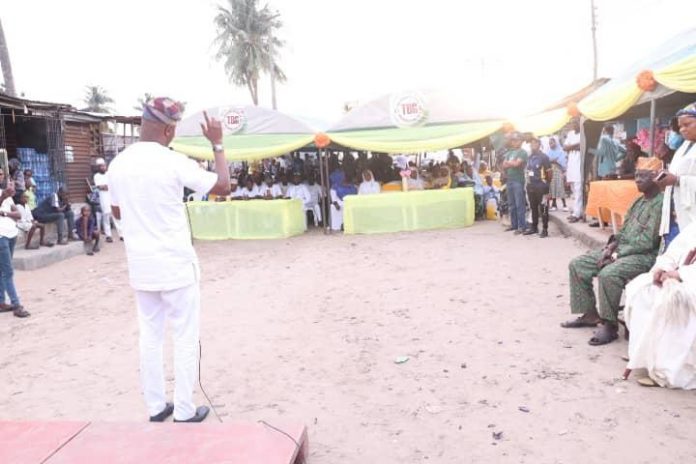 As the Muslim faithful draw the curtain on the holy month of Ramadan, the Lead Visioner of the Lagos4Lagos movement, Dr. Abdul-Azeez Olajide Adediran (Jandor) and his team were received with open arms yesterday at Ijanikin, within the Ojo LGA of Lagos State where Jandor was Special Guest of honour at the 4th Annual Ramadan Lecture organized by Morkaz Thanni Arabic and Islamic Institute, Badagry Division, Ijanikin in collaboration with Easy Base Club, Ijanikin, Lagos.

Also in attendance at the lecture were Fadeelat Sheikh Dr. Ibrahim Ebunoluwapo, Guest Lecturer; Fadeelat Sheikh Yusuf Olabanji, the Chief Host who also doubles as the Chief Imam of Ijanikin; and Kabiyesi Oba Muhammadu Asafa Onijanikin of Ijanikin Kingdom amongst others. Sheikh Ebunoluwapo centered his lecture on candid to advice to the teaming youths, urging them to ensure they get themselves organized and pragmatic. He reiterated that walking the talk is the only veritable step to climb the ladder of success. On his part, the Chief host, Sheikh Olabanji showered encomiums on Dr. Adediran for his exemplary brazen dedication to a good cause. He described Jandor as a worthwhile leader who is not ashamed to always associate with his people. The Chief Imam also seized the opportunity to appeal to all Lagosians for sustained solidarity to the Lagos4Lagos project so as to ensure the much-desired liberation of the people of Lagos State.

In his own remarks, Jandor requested Lagos residents to be strong willed as God’s hands are in the Lagos4Lagos movement and He will definitely see to the success of the project. Furthermore, he stated that the teaming populace should be vanguard of change especially in our quest for paradigm shift. He continued by praising the steadfastness and solidarity of the entire Badagry Division, and reassured them that their unity and commitment to the movement will be of significant impact in producing the next Governor of the state in 2023.

In closing, and as his speech was met with the usual acceptance and thunderous applause, Jandor appealed to everyone to always plan and work hard as these are the only panacea and rudiments for success that come with divine blessings from Allah.