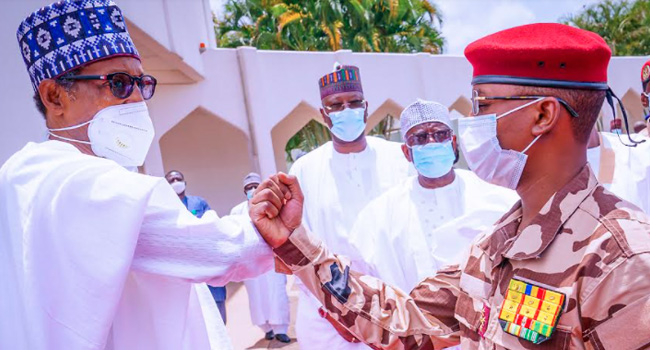 President Muhammadu Buhari is currently meeting with Chad’s Transitional Leader, General Mahamat Idriss Deby. The meeting is being held at the forecourt of the Statehouse in Abuja. Both leaders are expected to discuss the transition process and the fight against insurgents in the Lake Chad Basin.

General Mahamat came to power after his father, President Idriss Déby Itno, died following clashes with rebels in April 2021 in the north of the country. The so-called Transitional Military Council (CMT) had pledged to restore democracy to the poor Sahel country within 18 months after what the opposition condemned as an “institutional coup”.

Deby also created a new national reconciliation ministry to be headed by Acheick Ibn Oumar, a former rebel chief who became a diplomatic adviser to the presidency in 2019.

I’m impressed with Masari, Military but we still have a lot...