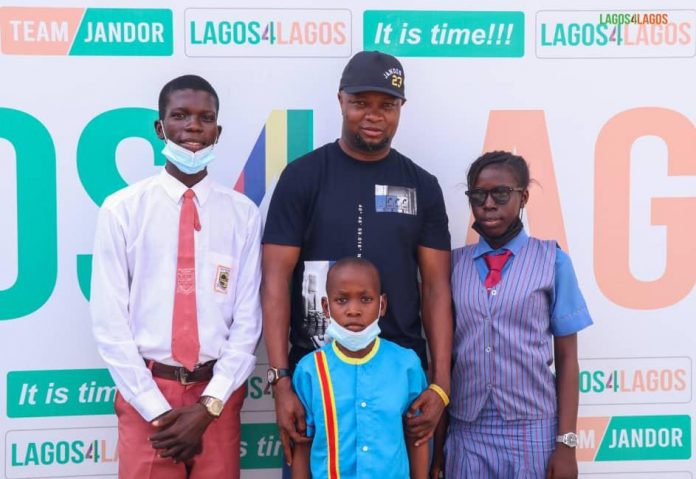 It was indeed a promise kept and hope for better future for three young students and residents of Makoko area of Lagos as the Lead Visioner of the Lagos4Lagos Movement, Dr. Abdul-Azeez Olajide Adediran (Jandor), made true his commitment to sponsor their education from their current varying stages in secondary school till the end of their chosen disciplines in tertiary institutions.

Recall a few weeks ago, specifically on April 3, 2021, Jandor was hosted as a distinguished guest of honour at the annual Makoko day celebration where he made an on-the-spot announcement to grant scholarships for Makoko students who have distinguished themselves in their academic pursuits.

The scholarship recipients, Hunye Hubert Jesuton (19 years), Oladimeji Zainab (13 years) and Olatoye Mustapha (9 years) alongside their families, yesterday visited Jandor at the Liberty Place, the Headquarters and State Secretariat of the Lagos4Lagos Movement, to express profound appreciation as Jandor handed over all required documents signaling full scholarships to the three successful Makoko students, up to the University level.

It is another promise kept as the Makoko trio join the club of teeming indigent students in Lagos benefiting from Jandor’s scholarship program up to university level. In appreciation, the parents of the students said they were confident that the scholarships will undoubtedly set the kids on the path of personal growth and development which will place them on equal pedestal with their colleagues around the world.

In response, Jandor promised to be relentless in his pursuit for qualitative education to the people of Lagos state as part of strategies to actualize the millennium development goals for our dear state.