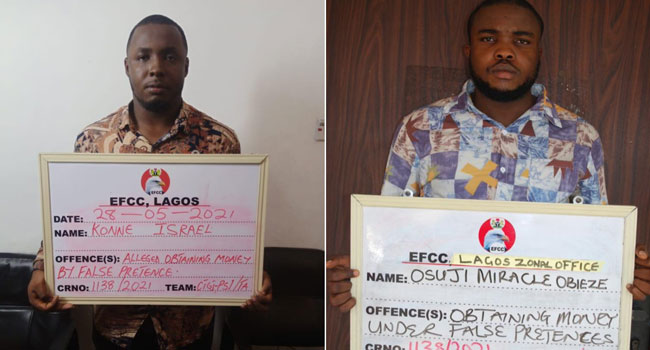 The suspects, alongside Obialor Christian Worenwu (now at large), allegedly approached an investment company, Luxury Gold, for an investment loan facility. Subsequently, the sum of N110, 000, 000. 00(One Hundred and Ten Million Naira) was paid into the GTBank account of Barieeba, while the sum of N255, 000, 000. 00(Two Hundred and Fifty-five Million Naira) was paid into the First City Monument Bank account of Obieze.

The third suspect, Worenwu, who is at large, also received the sum of N403, 585, 000. 00(Four Hundred and Three Million, Five Hundred and Eighty-five Thousand Naira) in his GTBank account. The petitioner also alleged that the loans were to be repaid sometime in March 2021. However, all efforts by the petitioner to make the suspects repay the loans granted them proved abortive.

Investigations revealed that the suspects, who were arrested sometime in June 2021, diverted the money obtained from Luxury Gold for their personal use and also bought cars, jewelry, and landed properties.

Presidency 2023: Atiku donates N50m to victims of bandits attack in...