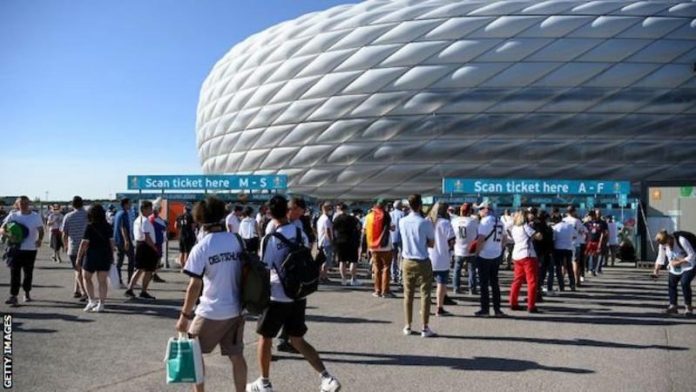 Uefa has declined a request to light up the Allianz Arena in rainbow colours before Germany’s Euro 2020 match against Hungary on Wednesday. Munich mayor Dieter Reiter made the request in protest against a new law in Hungary that bans the sharing of any content seen as promoting homosexuality and gender change to under-18s.

Uefa says it denied the request because of the “political context”. It has instead proposed alternative dates for the stadium to be lit up. In a statement, European football’s governing body said: “Uefa understands that the intention is also to send a message to promote diversity and inclusion – a cause, which Uefa has been supporting for many years – having joined forces with European clubs, national teams and their players, launching campaigns and plenty of activities all over Europe to promote the ethos that football should be open to everyone.

“And consequently, Uefa has proposed alternative dates for the illumination which align better with existing events. “Racism, homophobia, sexism, and all forms of discrimination are a stain on our societies – and represent one of the biggest problems faced by the game today. Discriminatory behaviour has marred both matches themselves and, outside the stadiums, the online discourse around the sport we love.” Germany goalkeeper Manuel Neuer will be allowed to wear his rainbow captain’s armband during the game.

BUDGET NOW TO BE PASSED ON TUESDAY