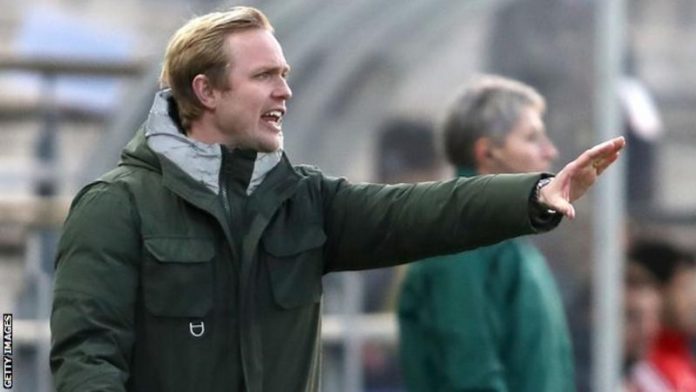 Arsenal have appointed Rosengard boss Jonas Eidevall as their new head coach. The 38-year-old guided the Swedish side to the quarter-finals of last season’s Women’s Champions League. Eidevall succeeds Joe Montemurro, who left the Gunners at the end of the season after four years in charge.

The Swede, who had a brief spell as Henrik Larsson’s assistant at Helsingborgs, has led Rosengard to three Swedish titles in two spells and has coached at men’s side Lunds BK. “Arsenal have a rich history, more successful than any other women’s team in England. I want to add to these honours,” he told the club website.  “It’s super important that we win, and we will be very ambitious about that, but it’s even more important that we live the values and defend the club badge on a day-to-day basis. I cannot wait to do that at Arsenal.”

Eidevall began his coaching career as a 23-year-old with Lunds BK, becoming head coach three-and-a-half years later and guiding the side to the Swedish second tier title. He then moved to Rosengard, first as an assistant and then as head coach, winning the Swedish women’s title in 2013 and 2014 before teaming up with former Celtic and Barcelona striker Larsson for a short time at Helsingborgs.

He returned to Rosengard and led them to the 2018 Swedish Cup and 2019 league title before their run in Europe last season.