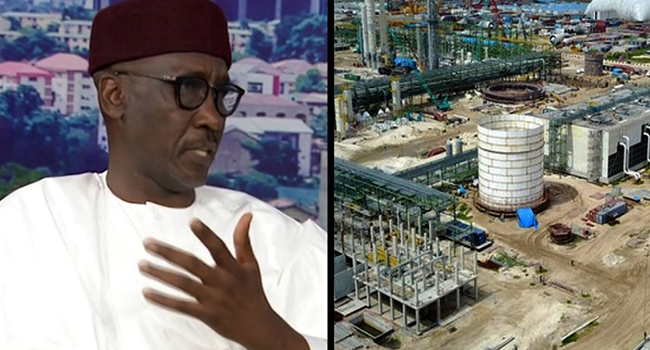 The Managing Director of the Nigerian National Petroleum Corporation, Mele Kyari, on Tuesday explained why the National Oil Company is purchasing a stake in Dangote oil refinery. The refinery is expected to begin production in 2022 with an installed 650,000 barrels per day capacity. It has been touted as a groundbreaking project for energy security in the country and for the African continent.

In May, the NNPC announced that it plans to acquire a 20 percent equity stake in the private company led by billionaire Aliko Dangote. “There is no resource-dependent country that will watch a business of this scale, which borders on energy security and has implications for fiscal security of the country, and you don’t have a say,” Mr Kyari said on Tuesday while appearing on Channels Television’s Sunrise Daily monitored by Core TV News.

He argued that the decision was also driven by the profit potential of the refinery business. “For the Dangote refinery, we are not taking government money to buy it, which is the mistake that people are making,” he said. “We are borrowing on the back of the cash-flow of this business. “We know that this business is viable, it will work and it will return dividends. It has a cash-flow that is sustainable because refinery business, in the short term, will continue to be sustainable.

“That’s why banks have come forward to lend to us, so we can take equity in this.”

Troops kill over 30 terrorists during raid in Borno