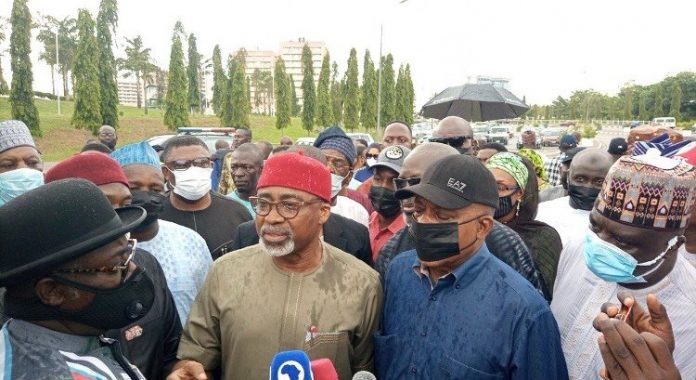 Leaders of the main opposition party, the People’s Democratic Party (PDP), on Wednesday stormed the National Assembly in protest. The leaders are demanding the immediate reversal of President Muhammadu Buhari’s nomination of Lauretta Onochie as National Commissioner of the Independent National Electoral Commission (INEC).

Lauretta Onochie is currently the media aide to President Buhari on social media. Led by its National Chairman, Uche Secondus, the PDP described the appointment as a travesty on democracy. Secondus said Onochie being a card-carrying member of the All Progressives Congress (APC) cannot be appointed into a position that requires a high level of neutrality.

He urged the National Assembly leadership to impress on President Muhammadu Buhari to immediately withdraw her nomination. The party also raised concern over the recent defection of some members of the PDP to APC and blamed it on the approach used by APC in luring the defectors. The party further accused the current administration of impoverishing Nigeria and subjecting the citizens to untold hardship.

Some PDP lawmakers including the Senate Minority leader, Senator Eyinnaya Abaribe were among those who joined in the protest.