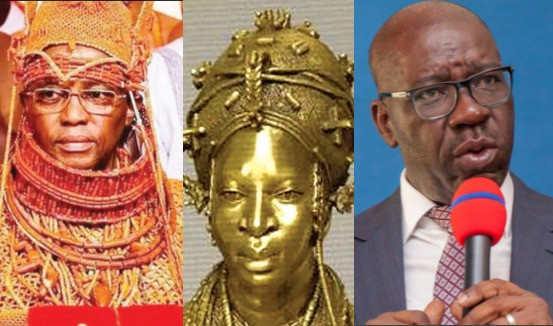 The Governor of Edo State, Godwin Obaseki, has ordered that no one, whether in government or acting independently should engage in “disrespectful exchanges” with the Oba of Benin, Ewuare II, over stolen artefacts.

This was disclosed in a statement issued on Monday by the Secretary to the Edo State Government, Osarodion Ogie. Obaseki was reacting to a statement issued by the Oba of Benin asking the Federal Government to temporarily take custody of 1,130 stolen Benin artefacts that are about to be repatriated from Europe.

The monarch had earlier said, following a statement issued by the Edo State Government which revealed that a “transformational” museum would be built in Benin to house the artefacts upon their return, the rightful destination of the artefacts should be the Benin Royal Museum.

Edo government in the statement issued on Monday allayed fears of a conflict between the state government and the Oba of Benin, adding that Governor Obaseki will maintain his immense respect for the monarch. “The attention of the Edo State Government (EDSG) has been drawn to the widely publicised media statement issued by the Palace of His Royal Majesty, Omo N’Oba N’Edo Uku Akpolokpolo, Oba of Benin, Oba Ewuare II.

1,130 looted Nigerian artefacts will be returned in 2022, says Germany