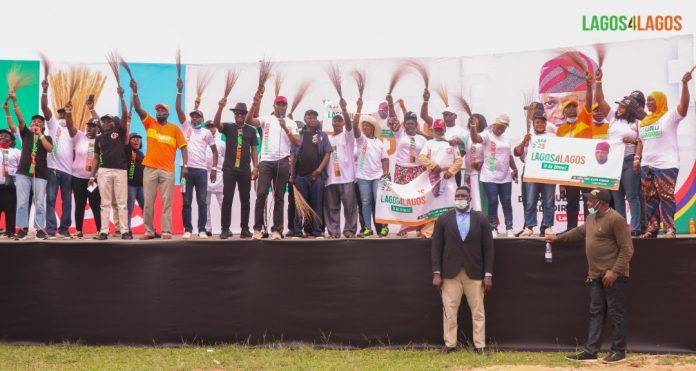 The Lead Visioner of Lagos4Lagos Movement, Dr. Abdul-Azeez Olajide Adediran, aka JANDOR, has appealed to the National Caretaker Committee of the All Progressives Congress (APC), led by the Yobe State Governor, Mai Mala Buni, to dissolve the party’s Caretaker Committee for the Lagos State chapter because of what he described as, “the high handedness and corruption” that characterised the last primary elections to pick the party’s candidates for the coming local government elections in the state.

Speaking at sensitization rally of his group in Lagos on Sunday, 11 July, 2021 ahead of the state Congress of the party, Jandor said, “it’s now crystal clear that the Tunde Balogun led committee has outlived its usefulness”. “The APC state committee should be dissolved. We need a new committee that will work for everyone, not listening to the dictate of one man. “We have written to pass a vote of no confidence on the Tunde Balogun led Caretaker Committee because they mismanaged the APC primary election in the state”.

Jandor who said the Buni led committee has right the wrongs under the previous Oshiomhole led NWC, urged him to do the needful and save Lagos APC from implosion and dissolve the state caretaker committee, which he says no longer represent the people. “They no longer represent the interest of our people, instead, they have turned against their wishes and aspirations. “Nearly all those who paid N2 million for chairmanship and N50,000 for Councillorship nomination forms had their hopes and aspirations dashed. At the end of the day, there was no credible primaries. It was imposition everywhere. The people you see here today are intending party officers from the 245 wards across the state and they are ready for the state Congress.

“The Tunde Balogun committee is opposed to congress. What they want is imposition. “We want State APC committee to be dissolved and probed because they collected humongous nominations fees from aspirants without conducting any credible primaries. By 2023, we want to return Lagos to Lagos where power will truly belong to the people and the electorate will have a say on who will govern them,” he said.

But reacting to this, the Publicity Secretary of Lagos State Caretaker Committee of the party, Seye Oladejo, said the Lagos4Lagos Movement had no locus standi to criticise the primary elections of the party since the group did not participate in the exercise. “They have no locus standi to criticise or talk about the primaries since they did not participate in the exercise. “However, if they feel aggrieved, the legal option is there for them to take,” Oladejo said.

Speaking earlier, a former Secretary to Lagos State Government, Princess Adenrele Adeniran Ogunsanya urged members of the Lagos4Lagos Movement not to be afraid, but steadfast as new change is coming to Lagos.