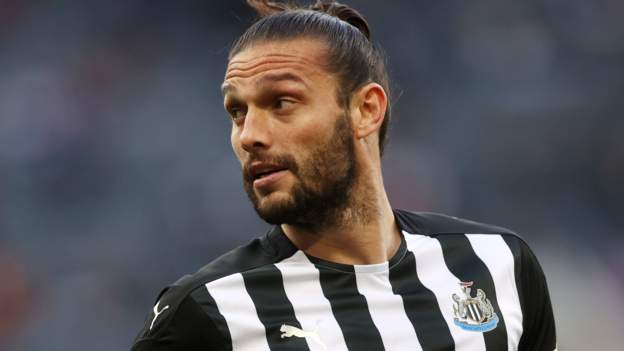 Former England striker Andy Carroll is looking for a new club after leaving Newcastle, boss Steve Bruce says. Bruce added that Carroll, 32, needs to “go and play somewhere” after his contract expired at the end of June, but said his exit was “amicable”.

Carroll was in his second spell with Newcastle, rejoining from West Ham in 2019 – eight years after leaving for Liverpool for around £35m. He struggled with injuries and form, making eight league starts for Bruce. Carroll made nine England appearances between 2010 and 2012, scoring on two occasions – against Ghana in a friendly and against Sweden at Euro 2012.

Newcastle are still “badgering away” trying to bring Joe Willock back to the club, added Bruce. Willock, 21, helped the team secure their Premier League future by scoring eight goals in 14 top-flight appearances while on loan from Arsenal in 2020-21. Bruce is keen to bring the England Under-21 player back on loan after he helped propel Newcastle to a 12th-placed finish following a strong end to the season. “As I’ve said, it’s really Arsenal’s decision,” Bruce said.

“And until Arsenal make a decision – a bit like all the big clubs, they have a look over pre-season and see what they’re getting in and not getting in – we’ll keep monitoring and badgering away.”

World Trade Organization: Nigeria, 13 other countries vie for excellence in...