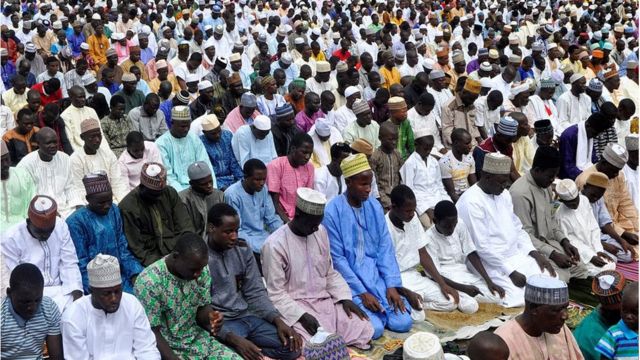 Muslims in Nigeria have joined their counterparts across the globe to celebrate the 2021 Eid-El-Adha also known as Eid-El Kabir Sallah. In the nation’s capital, Muslims converged on the Abuja National Eid Ground to observe the three Rakat. The prayers were observed with strict adherence to the COVID-19 protocols.

Before going into the Eid ground, worshippers lined up to have their temperatures checked as health workers are also on the ground to administer hand sanitizers on the hands of the worshippers. Among the personalities who observed prayer at the National, Eid ground is the FCT Minister, Mohammed Bello. The prayer was led by the Imam of the National Mosque, Dr Muhammad Kabir Adam.

In his Sallah message, the Muslim cleric urged Muslims to imbibe the virtues of self-sacrifice, obedience to God, and love for humanity as exemplified by Prophet Ibrahim. He urged them to share part of the meat of whatever they have slaughtered with those in need.

The Minister of FCT, Mr Mohammed Bello while addressing journalists at the end of the prayers called on residents of the nation’s capital to be law-abiding, security conscious, and united.