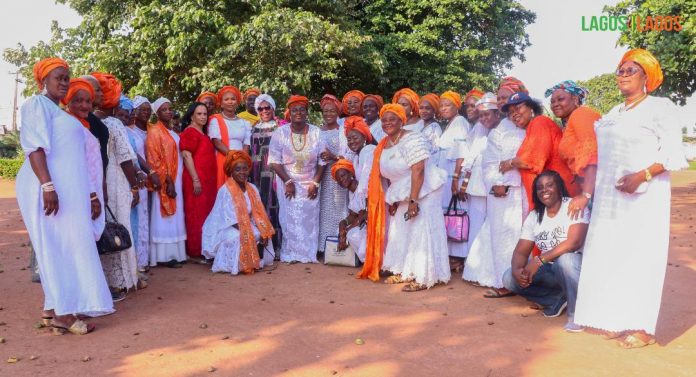 In a quest to entrench unity of purpose in the Lagos4Lagos movement and consolidate on the achievements thus far, the Apex body of Lagos4Lagos women wing, recently paid a courtesy visit to her chairperson and former SSG to the Lagos State Government, Princess Adenrele Adeniran-Ogunsanya at her Ikorodu country home. The visit’s objective was to exchange ideas with the highly respected former SSG on the role of women in effecting the positive changes we desire in Lagos.

The Apex body narrowed down in trying not to the coming APC congresses and how the inclusiveness of the womenfolk would be achieved seamlessly. The body extensively discussed the several attacks being meted out to Lagos4Lagos members by the state, following the total success of our pre-congress rallies. The body concluded that it will no longer tolerate such animosity and high handedness by the status quo. They concluded that enough is enough. The Apex body also evaluated the obvious voter-apathy that characterised the recently concluded local council elections which is a new low in the history of elections in Lagos state. The body reflected rather soberly and advised that the party at the national level should come to the rescue.

In attendance at gathering were: Alh. Bola Jafojo, Chief Mrs. Omolara Diko, Alh. Sherifat Abiola Abu – APC Woman Leader (Diaspora) among others. The Lagos4Lagos Women Leader, Princess Olajumoke Fakoya encouraged women not to give up on working tirelessly towards the singular aim of a Lagos that works for all. The Central Coordinator if the movement, Funke Ijayekunle asked women to embark on aggressive door to door campaigns to raise the awareness for more women involvement towards achieving the objectives in the tasks ahead.

Princess Adeniran-Ogunsanya, drawing from her depth of wisdom and experience urged women to stand firm and resolute by avoiding intimidation from any quarters. We are indeed mobilising for progressive change, she concluded.