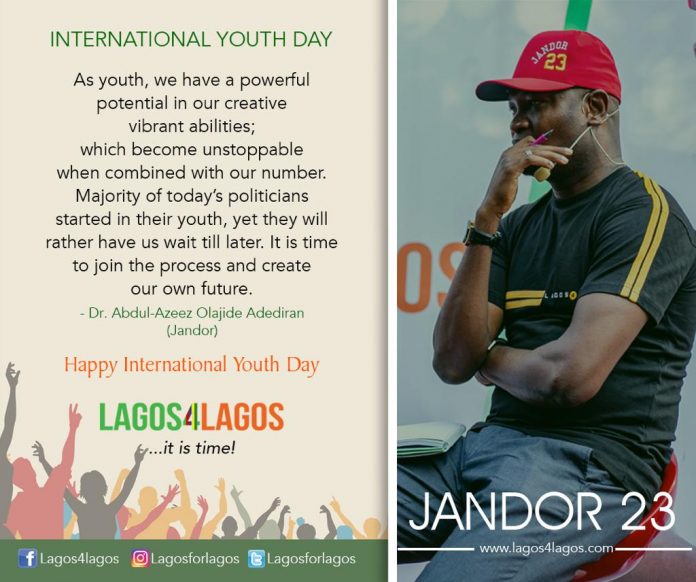 There is no doubt that young people world over, are naturally more creative, energetic and are in the frontlines of major breakthroughs in varying careers, governance and politics inclusive. The youth are natural torchbearers and forerunners for transformation and developmental strides globally.  International Youth Day is observed annually to give voice to the actions and initiatives taken by the youth across the world; it is a day to raise awareness regarding the issues facing humanity especially creating the vehicle for the redemption of hope in the society.

Lead Visioner of the Lagos4Lagos Movement, Dr. Abdul-Azeez Olajide Adediran (Jandor) who himself is a youth and a notable voice for good governance and preservation of the tenets of democracy, appealed to the older generation, especially politicians, to always encourage the active involvement of the youth in political activities and leadership. Speaking further on the occasion of the International Youth Day, Jandor enthused that it’s time for the youth in Lagos to have courage to change old ideas and practices that are now inimical to the development of the state.

Jandor while commending youths from all strata who have identified with the philosophy of the Lagos4Lagos movement, encouraged others to join in so greater success can be achieved. He admonished the youth in Lagos to desist from making themselves willing tools in the hands of the so-called political leaders whose stock in trade is to use them as thugs and personal militias. Indeed the youth are the cardinal pillar of our struggles in Lagos4Lagos movement and the hope of our future. The future is now, he concluded.

‘My emotions got the best of me’: Desmond Elliot apologizes over...