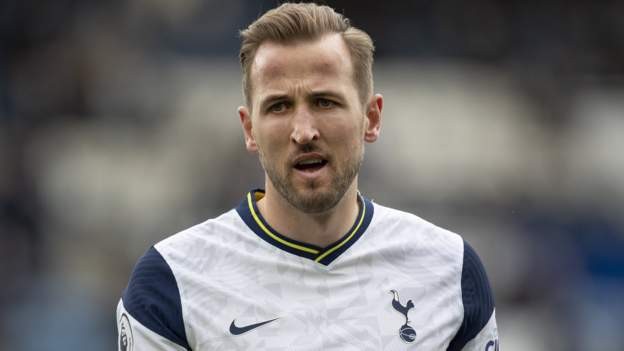 Tottenham striker Harry Kane has travelled with the squad for Sunday’s match at Wolves (14:00 GMT). Kane, 28, has been linked with a move to Manchester City, who are understood to be willing to break their £100m British transfer record to sign him.

The England captain was left out of Spurs’ squad as they beat City last Sunday in their Premier League opener. He also missed Thursday’s Europa Conference League defeat at Portuguese side Pacos de Ferreira. Kane did not turn up at Spurs when initially expected following a break after Euro 2020, but later said he has “never refused to train” and would return to the club as planned.

He believes he has a gentleman’s agreement with Daniel Levy to leave this summer, but the Spurs chairman has has refused to enter into negotiations. Spurs manager Nuno Espirito Santo has declined to be drawn on Kane’s future and said in pre-match comments on Friday: “He trained today. He trained good. He will train tomorrow [Saturday] and tomorrow we will make a decision.”

“I’m so sorry to keep saying the same things but this is how we work. It’s a day by day situation.” He also said he was personally kept up to date with Kane’s situation “every day”.

NNPC Limited to kick off in six months – Sylva