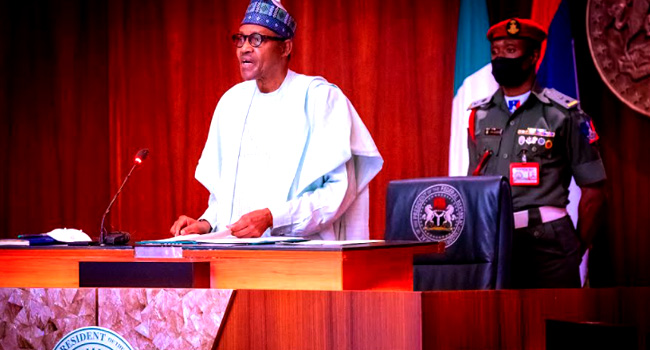 President Muhammadu Buhari has announced the declaration of a Profit after Tax (PAT) of N287billion in the year 2020 by the Nigerian National Petroleum Corporation (NNPC). According to a communique by his special media aide, Femi Adesina, the President’s announcement is in fulfillment of an earlier pledge by the Federal Government to publicly declare the financial position of the NNPC.

Adesina’s statement notes that Buhari has disclosed a Net Profit, making it the first time in the 44-year history of the establishment. According to the President, who doubles as Minister for Petroleum Resources, “I am pleased to announce the declaration of Profit after Tax of Two Hundred and Eighty-Seven Billion Naira (N287 Billion) in Year 2020 by the Nigerian National Petroleum Corporation.

This is sequel to the completion of the statutory Annual Audit exercise for Year 2020. “The NNPC losses were reduced from N803 Billion in year 2018 to N1.7 Billion in year 2019 and the eventual declaration of Net Profit in Year 2020 for the first time in its 44-year history.

“This development is consistent with this administration’s commitment to ensuring prudent management of resources and maximization of value for the Nigerian people from their natural resources.