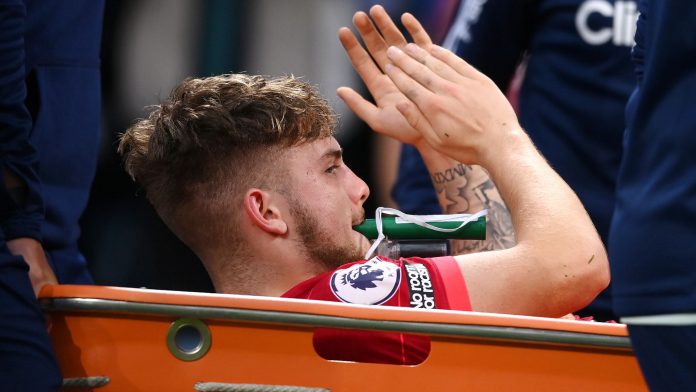 A visibly upset Jurgen Klopp said Liverpool’s Harvey Elliott was in “massive pain” after suffering a serious ankle injury at Leeds. Elliott, 18, was carried off on a stretcher and taken to hospital following a challenge by Leeds defender Pascal Struijk, who was sent off.

Klopp said Elliott had dislocated his ankle during Liverpool’s 3-0 win. “We’ll play without him, but we will wait for him as well because he is a top player,” added the Liverpool boss. Liverpool added later on Sunday that the former Fulham teenager had been discharged from hospital but will need surgery in the coming days.

“Harvey, his family and Liverpool FC would like to place on record their thanks to the paramedics and all the staff at Leeds General Infirmary for the care and treatment given,” the club said in a statement. On Monday, Elliot replied to an Instagram post saying Struijk had nothing to apologise for.

He wrote: “Wasn’t his fault what so ever! Neither was it a red card just a freak accident but these things happen in football. I’ll be back stronger 100%. Thanks for all the support.”

AIB submits interim report on crash that killed Attahiru, 10 others

Our people can solve a lot of our problems – Osinbajo