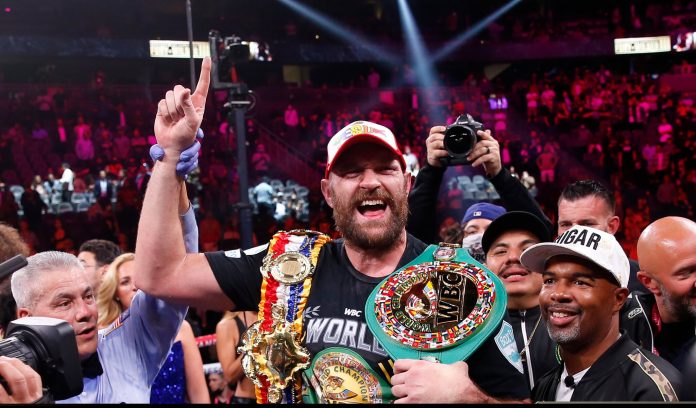 Fury beat Wilder in the 11th round to keep his heavyweight title, finishing a trilogy bout that was certain to be an instant classic. There’s no second-guessing it this time for Deontay Wilder. There’s no one else to blame, either. No trainer threw in the towel. The exotic costume he wore wasn’t as heavy. No judge can award him another fight.

For the second time in 20 months, Wilder tasted the devastating blows of Tyson Fury. Just like then, Wilder lost. In this iteration of the contest we’ve seen three times now, Fury (31-0-1) knocked out Wilder (42-2-1) in the 11th round, dropping him with a right hook near the ropes.

Wilder’s body collapsed limp into the center of the ring and the referee mercifully ended the bout. Fury raised his hands in victory as he walked to his corner knowing that he had retained the World Boxing Council heavyweight belt, which he had stripped from the same man so long ago when to Americans the coronavirus seemed like a distant problem on the other side of the world. There are no moral victories, but to Wilder’s credit, he competed in a trilling fight. Unlike in their previous meeting in February 2020, Wilder forced Fury into the later rounds, zapping his energy and knocking him down twice. He handled the clinch of the larger man well in the beginning, too.

Fury, though, withstood the damage and also knocked Wilder down two times before the knockout. In Round 10, Wilder threw a punch, missed and Fury connected with a counter right, sending Wilder to the canvas. Though Wilder recovered, it clearly hurt him heading into the next round, leading to the climatic finish.

“I always said I was the best in the world and he was the second best,” Fury said. “Don’t ever doubt me. When the chips are down, I will always deliver.”

Buhari reiterates plans to lift 100 million Nigerians out of poverty