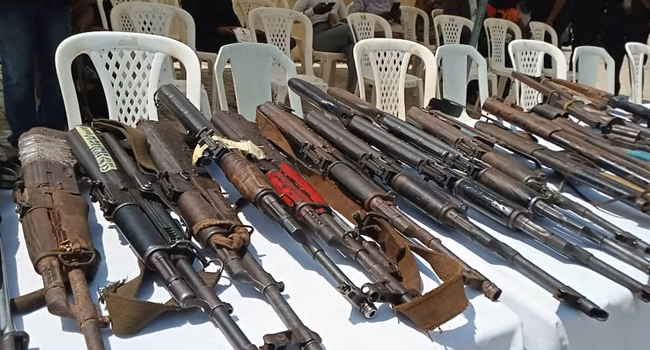 Police in the Federal Capital Territory, Abuja have paraded 48 suspects for various crimes including kidnapping, armed robbery and burglary. The Force Public Relations, CP Frank Mba, who paraded the suspects at the Intelligence Response Team office in Abuja on Tuesday, said a total of 28 assorted weapons including laptops and phones were recovered from the suspects.

The weapons include nine AK-49 rifles, three AK-47, 495 AK-47 live ammunition and 10 laptops. The suspects paraded include a 36-year-old man, Abubakar Haliru, who was said to have kidnapped his cousin, one 48-year-old Binta Muhammed in Jigawa State.

According to CP Mba, Binta had given Haliru money to purchase four tricycles, but instead of buying the tricycles, he decided to connive with a gang of kidnappers to abduct her. He said Binta was, however, rescued by men of the Intelligence Response Team. Another gang of kidnappers said to be operating in the northwest and north-central states was also paraded.

According to the Force PRO, the gang is responsible for the kidnap of one Reverend Father Tony Bawa in Kushin Makaranta area of the state.

YOU MUST GO ON MAY 21, PDP BOT WARNS SHERIFF

How Atiku will beat Obi, Tinubu to become President of Nigeria...