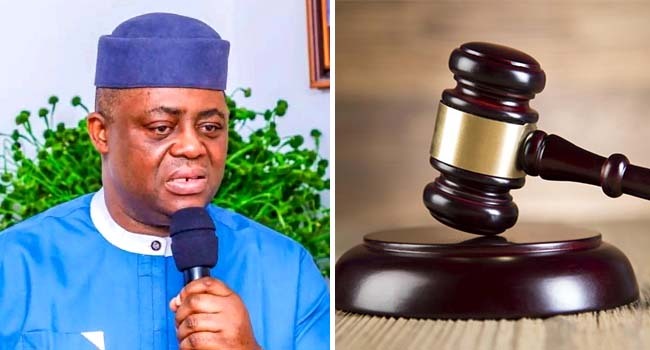 The Federal High Court sitting in Lagos has ordered a former Minister Of Aviation, Femi Fani-Kayode, to pay a fine of N200,000 for being absent at his re-arraignment or stand the risk of having his bail revoked.

Justice Daniel Osaigor gave the order on Wednesday, saying that having gone through the court’s file, he observed five different letters by the defendant seeking adjournment on the same medical grounds. The Economic and Financial Crimes Commission (EFCC) had charged Fani-Kayode alongside a former Minister of State for Finance, Nenandi Usman, one Danjuma Yusuf, a former Chairman of ALGON, and a limited liability company, Jointrust Dimensions Nigeria Limited.

The EFCC preferred 17 counts of money laundering to the tune of N4.6 billion against them before Justice Mohammed Aikawa who was initially the trial judge until he was transferred out of the Lagos Jurisdiction. They all, however, pleaded not guilty to the charges and were granted bail.

The case was subsequently, assigned to a new judge, Justice Osaigor, and the defendants were scheduled for re-arraignment on Wednesday (October 13).

We have made impact on security, economy and corruption – Buhari

Another building collapses in Lagos