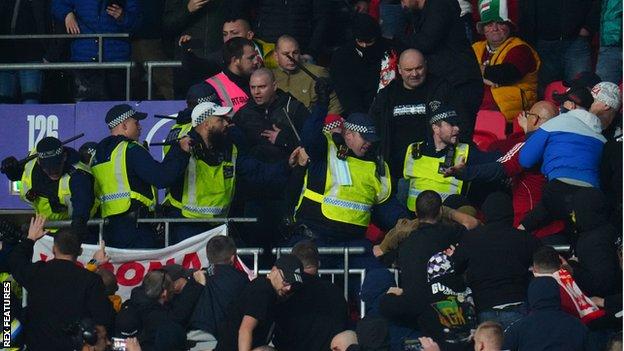 Hungary fans fought with police in the opening minutes of Tuesday’s World Cup qualifier against England at Wembley. Some of their supporters, totalling almost 1,000, booed as England players took the knee before kick-off.

The Metropolitan Police said “minor disorder” broke out as they arrested a fan for “a racially aggravated public order offence” in relation to comments directed towards a steward. In a statement, Fifa said it “strongly condemns” the incidents. Crowd trouble also marred Poland’s World Cup qualifying victory over Albania, with the game suspended for more than 20 minutes after home fans threw objects at the visiting players.

A spokesperson said: “Fifa is currently analysing reports of last night’s Fifa World Cup qualifier matches in order to determine the most appropriate action. “Fifa strongly condemns the incidents at England v Hungary and Albania v Poland and would like to state that its position remains firm and resolute in rejecting any form of violence as well as any form of discrimination or abuse.

“Fifa has a very clear zero-tolerance stance against such abhorrent behaviour in football.” On the trouble at Wembley, a Metropolitan Police statement said: “Officers entered the stand to arrest a spectator for a racially aggravated public order offence in relation to comments directed towards a steward. “As officers made the arrest, minor disorder broke out.”