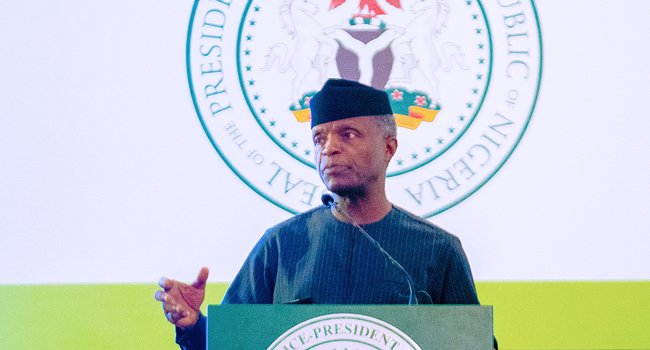 Vice President Yemi Osinbajo on Thursday tasked states to think out of the box in raising their respective Internally Generated Revenues. He made the remark at the maiden edition of Ekiti State’s maiden investment forum in Ado-Ekiti. “Thinking differently, there is a need for a sub-national to think like a sovereign State,” the Vice President said.

“You have a bigger GDP and even more revenues than many nations. There is a different mindset when you are sure of a monthly allocation of cash at least enough to pay salaries, whether you generate income or not. This is the challenge. The so-called Dutch disease, one becomes complacent. “But what if you had to take responsibility for all those who reside within your borders, pay all salaries, from internally generated revenue?” The VP recalled how Lagos State improved its IGR from N600million monthly in 1999/2000 to about N45billion today. He said the illegal seizure of the allocations to the State by the then Federal Government was the shock that forced the state to rethink.

Speaking further, Prof. Osinbajo noted that although a state within a Federation is not a nation, it must behave like one, to further boost its economic development. “The economy of the sub-national is a peculiar animal,” he said. “The state within the Federation is not a nation, but it must behave like one, it derives some resources from the Federal pool, and generates some income, the overall sum will provide infrastructure and services to the community. The size of the sum and the quantum of opportunity available to provide livelihoods for the populace will depend on how the State enables local and external investors, small and large to put their resources into business and commercial activity business in the State.”