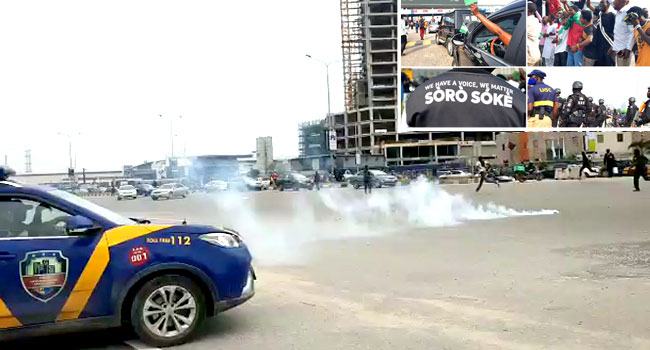 The police on Wednesday fired a tear gas canister at the Lekki tollgate where celebrities and youths held a memorial car procession in Lagos State. Scores of youths, including celebrities were participating in the parade amid the presence of armed security operatives before they were dispersed.

The procession, held in hounor of victims of police brutality, was organised to commemorate the one year anniversary of the #EndSARS protests that led to the disbandment of the Special Anti-robbery Squad (SARS) of the Nigeria Police. As earlier as 8am, many of the young Nigerians filled up several cars and buses, blaring horns as they drove through the toll plaza.

As the event continued, the number of youths at the venue grew while others came down from their cars, chanting solidarity songs. A drama also played out as an altercation ensued between members of the press and the security operatives after the journalists were harassed by the police at the venue. Two persons were arrested by the police. One of them was picked up by armed security operatives while he was having a chat with reporters.

But the Commissioner of Police in Lagos, Hakeem Odumosu, who was also at the venue, said the police did not disperse the youths taking part in the procession. Rather, he stated that the security operatives fired tear gas to disperse those he described as miscreants at the venue.

Supreme Court ruling: Only God can bail out Nigeria — Secondus