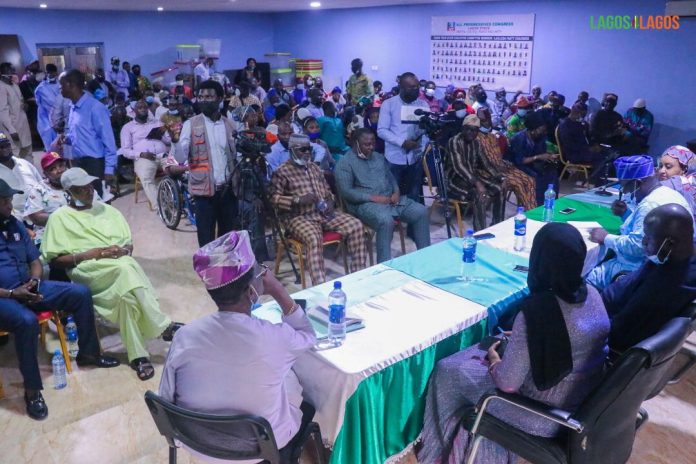 In response to an invitation by the appeal committee set up by the APC to look into the grievances arising from the state congress held on October 16, 2021, the Lagos4Lagos movement has attended a stakeholders meeting on Monday at the party secretariat on Acme Road, Ogba, Lagos.

The Lagos APC state Congress appeal committee headed by Barr. Fatima Zahra Umar welcomed stakeholders which included party faithful from aggrieved groups like Lagos4Lagos, Conscience group, Democrats group, AAMCO group and other members who expressed their concerns on the looming implosion of the party. State APC Chairman, Hon. Sunday Ajayi expressed his dismay on the unprofessional conduct of the appeal committee noting that the aggrieved groups were not formally recognized at the meeting. He also charged the committee to be fair to the groups by providing a level plain field for everyone to air their grievances

Also speaking in the same vein, the Assistant State Publicity Secretary, Kazeem Bakare faulted the modalities for choosing attendees for the meeting noting that it was skewed in favour of a particular group. He explained that justice should not just be served but be seen to be served if there would be any genuine reconciliation.  In its submission, the Conscience group advocated for inclusion within the party. They warned the party to pursue genuine reconciliation by listening to them noting that the real powers belong to the stakeholders at the grassroots because of their influence.

On their part the Democrats group complained about the uncertainty surrounding the outcomes of previous appeal committees set up by the national secretariat for the ward and LGA congresses. Earlier, the appeal committee chair, Barr. Fatima Zahra Umar had assured the aggrieved groups of its determination to be fair to all stakeholders. She noted that disagreement is usually not alien to a big family like the APC, promising to do her best to achieve the committee’s core mandate of reconciliation.