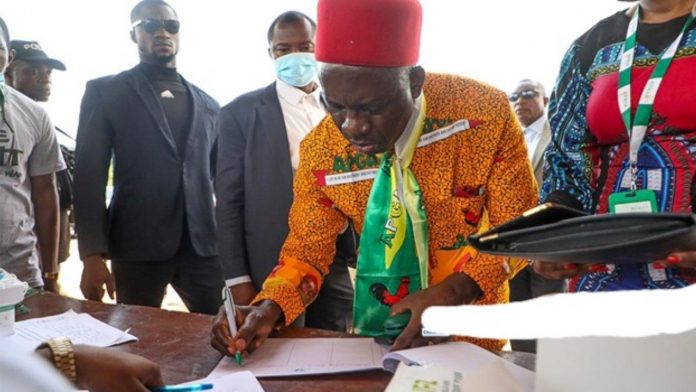 Candidates in the imminent Anambra governorship election on Thursday signed a peace accord in Awka, the state capital. The election is slated for Saturday.

Chairman of the Independent National Electoral Commission (INEC), Professor Mahmood Yakubu, was present at the ceremony, which was facilitated by the National Peace Committee. The NPC is chaired by former military Head of State, General Abdulsalami Abubakar.

Others were Valentine Ozigbo of the Peoples Democratic Party, Godwin Maduka of the Accord Party (AP), Etiaba Chukwuogo of the Action Alliance (AA), Nwankwo Chidozie of the African Action Congress (AAC), Onyejegbu Okwudili of the Allied Peoples Movement (APM), Ohajimkpo Emeka of the New Nigeria Peoples Party, Ezenwafor Victor of the National Rescue Movement (NRM), Nnamdi Nwawuo of the People’s Redemption Party (PRP), Uzo Godwin of the Social Democratic Party (SDP), and Okonkwo Francis of the Zenith Labour Party (ZLP).

Anambra, as in much of the South-East, has witnessed several ‘gunmen’ attacks, casting doubts on the safety of the elections. The proscribed Independent People of Biafra (IPOB) has also threatened the sanctity of the election if its leader, Nnamdi Kanu, is not released from detention. But the Federal Government has beefed up security in the state, pledging a free and fair poll.