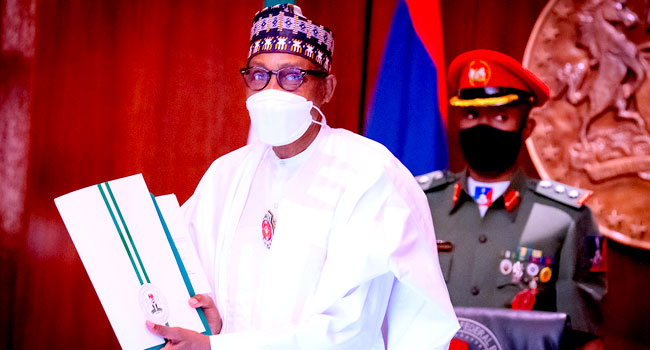 President Muhammadu Buhari on Friday expressed strong reservations on the “worrisome changes” made by the National Assembly to the 2022 Executive Budget proposal.

The President stated this on Friday in Abuja when he signed into law the 2022 Appropriation Bill and the 2021 Finance Bill in the presence of the Senate President, Ahmed Lawan; Speaker of the House of Representatives, Femi Gbajabiamila, and some members of the Federal Executive Council. He recounted that during the presentation of the 2022 Appropriation Bill, he had said the fiscal year 2022 would be very crucial in his administration’s efforts to complete and put to use critical agenda projects, as well as improve the general living conditions of the people.

“It is in this regard that I must express my reservations about many of the changes that the National Assembly has made to the 2022 Executive Budget proposal,” President Buhari was quoted as saying in a statement by his media aide, Garba Shehu.

“Some of the worrisome changes are as follows: Increase in projected FGN Independent Revenue by N400 billion, the justification for which is yet to be provided to the Executive; Reduction in the provision for Sinking Fund to Retire Maturing Bonds by N22 billion without any explanation; Reduction of the provisions for the Non-Regular Allowances of the Nigerian Police Force and the Nigerian Navy by N15 billion and N5 billion respectively.

JUST IN: Reps to amend mode of primaries in Electoral Act...