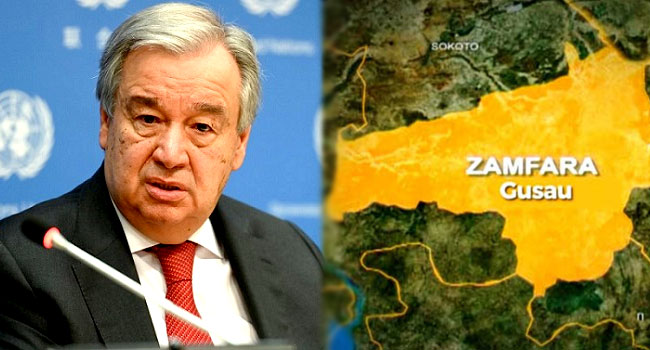 The United Nations Secretary-General, Mr Antonio Guterres, has condemned the recent attacks that claimed the lives of scores of residents in Zamfara State.

In a statement on Monday by his spokesman, Stephane Dujarric, he condoled with the families whose loved ones were lost to the attacks. He also called for the arrest and prosecution of the assailants and assured the Nigerian government of the UN’s support in the fight against terrorists and other criminals.

“The Secretary-General strongly condemns the appalling attacks perpetrated over the weekend in Nigeria’s Zamfara State in which scores of civilians were killed,” the statement said. “He extends his heartfelt condolences to the bereaved families.

“The Secretary-General urges the Nigerian authorities to spare no effort in bringing those responsible for these heinous crimes to justice.

“The Secretary-General reaffirms the solidarity and support of the United Nations to the Government and people of Nigeria in their fight against terrorism, violent extremism and organized crime.”

Experts warn against increasing rate of youth unemployment in Nigeria

No ransom was paid for release of Kankara schoolboys, Dapchi schoolgirls...