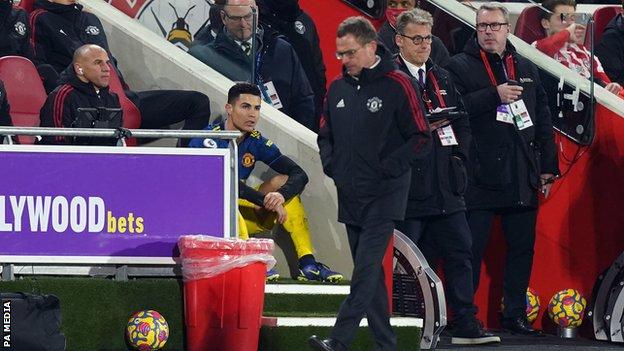 Manchester United interim boss Ralf Rangnick says he makes decisions “in the best interest of the team” after Cristiano Ronaldo reacted negatively to being substituted at Brentford. United, who won 3-1, were 2-0 up when the Portuguese forward was brought off with 20 minutes to go.

As he came off, Ronaldo uttered some words and threw his coat to the ground before sitting on a step in the dugout. Rangnick said Ronaldo’s reaction to being taken off was “normal”. The German also told BBC Sport: “He was not happy but he came back from injury. I was happy to have him on board for today’s game, especially after Edinson Cavani could not train.”

Rangnick indicated that his decision to substitute Ronaldo was driven in part by the experience of losing a two-goal lead late on at Aston Villa last Saturday, in a match the Portugal captain missed through injury. United drew 2-2 at Villa Park, having been 2-0 up with 13 minutes to go, and Rangnick was keen to avoid a similar late stumble in west London.

Rangnick said: “I told him [Ronaldo] we were 2-0 up and we have to learn lessons from Villa Park. After that game, I was angry with myself for not changing to a back five. “Today was exactly the same situation and I did not want to make the same mistake again. I said: Listen Cristiano, you are 36 and in great shape, but when you are a head coach, you will see it through the glasses of a head coach.’ “My job is to take the decisions in the best interest of the team and the club and I hope he sees it the same way.”

Issuance of new SIM cards to resume on April 19, says...