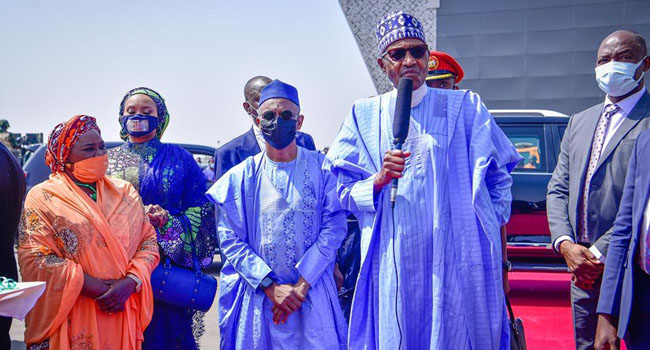 President Muhammadu Buhari on Thursday commissioned a bridge in Kaduna in an area where he was almost killed by Boko Haram terrorists. The President, at the time an aspirant, was caught in an explosion at the busy Kawu market area.

Although he escaped unhurt, his vehicle, a Toyota Land Cruiser, and another one behind it were badly damaged, reports at the time said. On Thursday during the commissioning of the Kawu Bridge, Governor Nasir El-Rufai recalled the incident.

“It is my great honour and privilege, Mr President, to bring you to the Kawu Flyover.  Mr President will recall this bridge very well because it was just under this bridge that Boko Haram tried to kill you,” the governor said at the event. “By the grace of God, you are still alive, you are with us and God preserved you so that you will lead us and inspire us to do some of what we are doing.”

While responding, Buhari, who is on a two-day visit to the northwest state to commission some projects, thanked God for sparing his life. He recalled how the terrorists “wanted to blow me but my escort somehow stopped them”. “I have lived in Kaduna for many years; I am very much aware of this route. I would not recall how much I crossed it and you told me how there was an attempt on my life on this route,” Buhari added.