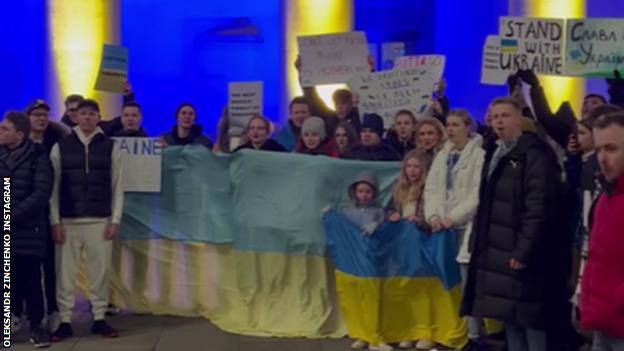 Manchester City’s Ukraine defender Oleksandr Zinchenko joined a vigil in Manchester city centre to show support for his country following its invasion by Russia. Zinchenko, 25, was among the crowd who gathered outside the city’s Central Library on Thursday evening.

The building was lit up in the blue and yellow colours of the Ukrainian flag. Russian President Vladimir Putin launched a military invasion of Ukraine in the early hours of Thursday morning. Zinchenko posted an image of the vigil on his Instagram page with the caption “No War! Pray for Ukraine.”

In an earlier post the full-back said the “whole civilized world is worried” about the situation in Ukraine, adding that “my country belongs to Ukrainians and no one will ever be able to appropriate it. We will not give up!”

Zinchenko, who has 48 caps for Ukraine, began his career with Russian Premier League side FC Ufa before joining Manchester City in 2016. He has made 115 appearances for the club, helping them win nine trophies including three Premier League titles.

Tambuwal explains reasons for his absence at PDP Governors’ meeting in...