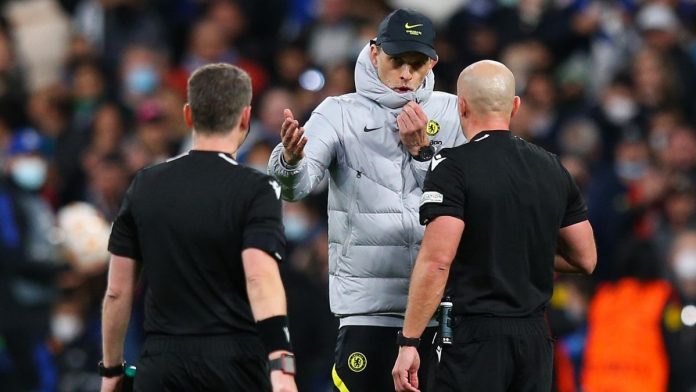 Thomas Tuchel has criticised the referee for “smiling and laughing” with Real Madrid boss Carlo Ancelotti after Chelsea’s Champions League exit. Tuchel said he was disappointed Szymon Marciniak appeared to be having “a good time with Carlo” at the final whistle.

Trailing 3-1 from the first leg, the Blues forced extra time against the record 13-time winners at the Bernabeu before losing 5-4 on aggregate. “I think this is the very, very worst time to do this,” said Tuchel. “After 126 minutes with one team giving their heart and desire, fighting to the very last drop.

“I know Carlo is a gentleman and a nice guy but when I wanted to go and say thank you [to the referee] I see him smiling and laughing loudly with the opponent coach. “I think it’s very, very bad timing.”

Tuchel was also unhappy the official did not check the VAR monitor himself when a Marcos Alonso effort was disallowed for handball in the second half. “If you play against Real Madrid you can maybe not expect everybody has the courage. I felt little decisions went against us also in the first leg and today as well,” he said.