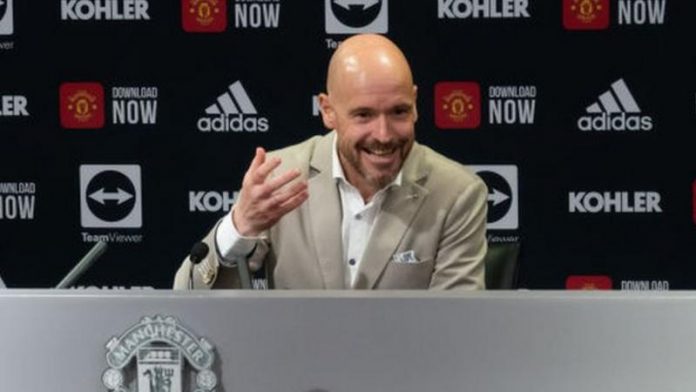 Erik ten Hag says he is not risking his managerial reputation by taking the Manchester United job. The Dutchman, 52, is United’s fifth permanent boss since Sir Alex Ferguson retired in 2013.

“I don’t see it as a risk,” he said. “I think this club has a great history, and now let’s make a future.” Ten Hag also suggested Cristiano Ronaldo would not be leaving, adding he expected there to be goals from the Portugal forward next season.

The former Ajax boss was speaking to reporters at his official unveiling as United manager 24 hours after watching his new club lose 1-0 at Crystal Palace on the final day of the season. Their points tally of 58, though good enough to secure sixth and a place in the Europa League, is their poorest return since 1989-1990 and comes just a year after they finished second behind Manchester City.

Ten Hag did not say how many players he felt the club needed to bring in over the summer, instead answering that he was still “in the process of analysing” his squad. “The plan is huge and we only have a short time,” he added.