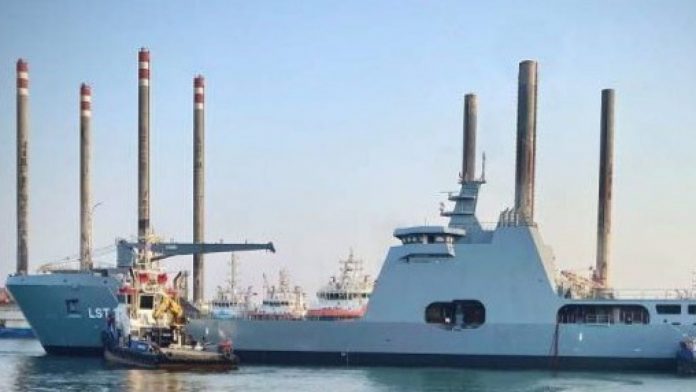 As part of her maiden voyage to Nigeria, Nigerian Navy Ship (NNS) KADA stopped over at Port Gentil, Gabon on Saturday 21 May 2022. This being her last Port Call before her arrival to Lagos. This is contained in a statement signed by the Director of Information Naval Headquarters, Commodore Ayo Vaughan. At Gentil, NNS KADA was received by the Deputy Mayor of Port Gentil, Mr Micheal Mboumba in company of Commander Pouta Honore, who represented the Commander of General Bolingui Koumba Base as well as the representative of the Chief of the Naval Staff, Gabonese Navy, Lieutenant Commander S Soumbity.

Also, a team from the Nigerian embassy comprising the Nigerian Ambassador (Amb) to Gabon, His Excellency, Amb Raymond Brown, the Nigerian Defence Attache overseeing Gabon, Captain C Azuike and a delegation from the Naval Headquarters (NHQ) led by the Flag Officer Commanding Eastern Naval Command, Rear Admiral IA Dewu who represented the Chief of the Naval Staff (CNS), Nigerian Navy (NN) accompanied by other senior officers were all at hand to receive NNS KADA.

In line with tradition, the Nigerian Embassy and NHQ delegates, including the Commanding Officer NNS KADA, Captain RO Adoki paid courtesy calls on some heads of selected government establishments. These include the Government House Ogooeu Maritime Province, the Port Gentil Council and the Naval Base, Port Gentil. The Governor of the Ogooue Maritime Province, represented by the Secretary General to the government, Mrs Roponat Mbina, appreciated the Nigerian delegation and wished them well in their mission in Port Gentil. Similarly, the Representative of the Commander of the General Bolingui Koumba Base welcomed the team and described their coming as auspicious as it will booster the relationship between the NN and Gabonese Navy for the security of the common maritime areas of both countries.

Responding to the remarks, the Nigeria’s Ambassador to Gabon stressed on the need for African countries to strive to invest in assets to secure and protect themselves. He further stated that the coming of NNS KADA echoes the effort for capacity building of Nigeria towards this objective.  Meanwhile, on his part, the representative of the CNS (NN) noted that the vessel is a Landing Ship Tank and is replacing 2 previous vessels of similar capability.

He Further noted the multiple roles of the vessel which include Sealift, Humanitarian and Disaster Relief Operations, Transportation and Maritime security operations, among others. On that basis, he affirmed that the vessel will be useful to both countries in maritime security and stressed the need for combined and joint operations for the security of the Gulf of Guinea. On his part, the Commanding Officer of NNS KADA expressed the happiness of the ship’s crew and the support so far given to the ship since she commenced the homeward voyage. He outlined the journey of the ship so far stating that she cast off from the United Arab Emirates on 2 April 2022 and is expected to arrive Lagos on 27 May 2022 after about 56 days.