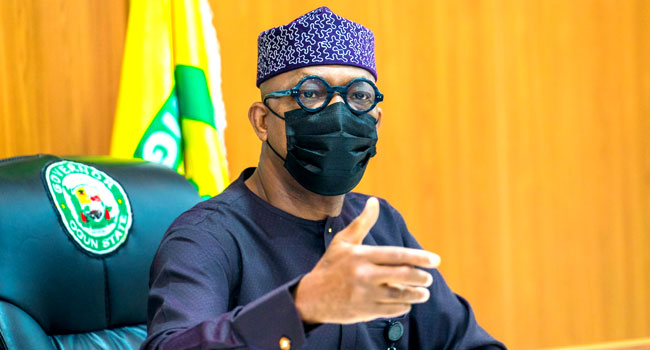 Governor Dapo Abiodun says he is holding the position for the people of Ogun State, hours after a chieftain of the All Progressives Congress (APC) Bola Tinubu claimed he helped him become the leader of the state.

In a tweet on his handle, the Ogun Governor said he is not an emperor, stressing that the governorship seat is not an inheritance. “I am not an emperor by any chance and this is not my family inheritance,” the governor said on Friday. “I am holding this position in trust for all the people of this state and I have vowed to be fair, just and equitable and this is the solemn agreement I made between the Almighty God and myself.”

In his address during a visit to APC delegates in Abeokuta, Tinubu had explained his role in the governor’s victory during the 2019 election. He claimed that APC stakeholders had rejected the Ogun governor but his intervention changed the game. “Dapo that’s sitting down here, could he have become Governor without me?” he said during the event.

“We were at the stadium; they tore all his posters. Even the party flag, they didn’t want to hand over it to him. I was the one who brought it. If he wants to meet God at the right place, he must know that without God and me, he would not have become Governor.”